Long, long ago, in a land far, far away (Richmond), three people were in a car headed for (shudder) Walmart. This trio had food on their minds, and dinner in their plans. However, their conversation strayed to that of domain names, and web hosting, and such related topics. There was much debate in the car as to what a good domain name would be. Our intrepid driver randomly said, “blackradish.com.” (There are those not party to this conversation that later tried to lay claim to the idea, but such is not the case.) Our other two voting parties both chimed in and agreed that such was a good domain name, and would be a valid purchase. Upon returning home from a less than exciting grocery shopping trip, a domain and hosting were procured. This was 2001.

Fast forward 13 years. 3100 miles west, a little older, a little wiser, still just as immature, The Radish as we affectionately call it, is still under the same ownership. Over time, the players have changed a little. Jim and John are still living ten minutes from each other. Likewise, our two heroes have traded up in the girlfriend department since those early days, adding April and Meg to the mix. Likewise, our sister’s Crash, and Miss Chipper Zee have joined us. We also welcomed our brother Barnaby and his lady Ruby into the fold. Ours is a family thats been a decade in the making, much like the things we’ve used our web-server for over the years, its always in a state of flux, and the needs we make of it change periodically. But, its still ours.

Over the course of the last 13 years, we’ve had a caterer, a fraternity, a sleazy porn outfit, and multiple other small time folks proposition us to sell off our domain to them, as their purpose is obviously more important than ours. To every query, to every request, we reply “no.” It is ours, we own it. It is not for sale, barter, or trade. It may not look like much to you, but we’re not trying to impress you. We have no interest in you. Please do not ask. The Radish is not for sale. We shall endeavour to keep it till our dying breath. Once thats been given, one would hope our kids will take over for us.

What may be next for our domain name, web-server and so on? No clue. But we’ll figure it out. And it will always be blackradish.com. 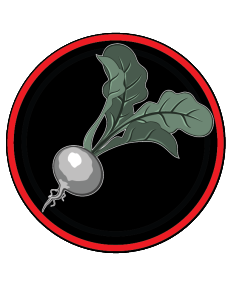